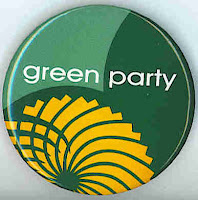 Charles Clarke doesn't write to the Evening News often so when he does, it is often on a politically sensitive or crucial issue. Today his letter dominates the paper with a quite remarkable attack on the "characteristically ill informed" Green Councillors.

Labour have, for quite some time now, plodding along ignoring the Greens whilst our eco-friends destroyed the LibDem vote and stole their seats. Labour are in power in City Hall now because the Greens have won over a lot of traditional LibDem areas. So for Mr Clarke to bite back like this is quite remarkable - maybe a few jitters over the next parliamentary election but far more likely is that political heavyweight Mr Clarke is fed up of the Greens being allowed to get away with peddling any old nonsense without being held to account.

The Greens now hold 9 out of 39 council seats and, if experts and polls prove to be correct, they will at least hold onto those and maybe even grow again in 2007. They are a major political force in Norwich (at least) and we should scrutinise what they have to say. I know that the LibDems find it hard to attack the Greens, so maybe this Clarke letter is the start of a Labour offensive against City Hall's third party?
Posted by Antony at 8:40 PM

Or is it because Clarke beleives Mr Wright and the Conservative candidate have little chance in Norwich South, and he is mainly threatened from a sexy vote that will follow Adrian Ramsay as a novelty? Clarke is right about Greens on certain issues. They are more closet fruitly socialists than environmental realists.

Who knows with the Rt Hon C Clarke MP these days.