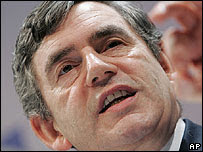 The BBC, amongst others, is current speculating about the posibility of a snap 2007 poll following Brown's coronation as Labour Leader. Labour Chairman Hazel Blears - currently engulfed in her own fight to be selected in a parliamentary seat following the abolishion of her current Salford berth - has even put out the feelers to Labour workers that it could come sooner rather than later. I'm very dubious about this - not for historical comparisons or anything of that like, but for one very simple reason.

Money. Labour doesn't have it and neither, to be totally honest, do the other parties. Labour would have to be fund raising much faster (and selecting PPCs too, but that is another matter) than they are at the moment to fill the finanical gap. I have always argued that Brown's best chance is by using the post-Blair bounce that is bound to happen - but a few housekeeping realities may stop that from happening.

Party finances need stability - and that is why all parties run in four year cycles. The bureaucracy loves regularity and snap polls could give a few party accountants heart attacks (on all sides). As money and finance become a bigger and bigger part of each subsequent election campaign the choosing of the date is more a question for the Treasurer than the Prime Minister.

The money men would much rather have fixed term parliaments and, I have to say, that is where my thinking is taking me too.
Posted by Antony at 9:19 PM