Who should be more worried?

Over on politicalbetting.com they are asking who should be more worried about the latest bouts of polls about the leaders of the three main parties (click here for the full thread).

All 3 leaders have gone up but Cameron (up 2) less than Clegg (up 6) and Miliband (up 4). Should the PM be concerned about this?

Maybe not as much as you might think; the details show that 95% of Tory voters think that Mr Cameron is doing well; compared to 79% of LibDems voters for Clegg and, most worryingly of all, just 72% of Labour voters for Miliband. Any leader needs to be at 90% plus for his or her own supporters, really.

What is also noteworthy is the cross-over between the LibDems and the Tories; 71% of LibDems feels that Cameron is doing well and 68% of Tories think the same of Nick Clegg.

So where does that leave us? God knows, but it shows that if you pay too much attention to the polls it can make your head hurt and leave you more confused than where you started!
Posted by Antony at 4:54 PM 5 comments:

It's been a while in the making but we're quite proud - take a look here. Any suggestions welcome!
Posted by Antony at 10:29 AM No comments:

Take a few moments to look at this website which gives details about the debt problem Britain has today. If it doesn't scare you, it should. Because today Britain rolled over the Trillion pound mark. As the website says, this debt is real and it needs to be paid back. This debt is not any different from the credit cards that we all have; eventually it catches up with you.

And if anybody ever tells you that the austerity measures are not necessary or urgent, just pop back and see how much our debt is at that time.
Posted by Antony at 10:49 PM 13 comments:

On the Andrew Marr show Ed Miliband was asked…

“Do you accept that before the crisis happened, actually Labour was spending too much?”

Posted by Antony at 9:14 PM No comments:

I cannot stand Ed Miliband. There, I've said it. I cannot find anything personally or politically "likeable" about this (yet). I cannot even stand to watch him on TV; he is so useless as Leader of the Opposition it is actually quite worrying for democracy. I don't know quite why; certainly I dislike his re-writing of history, his blanket opposition to all cuts without saying what Labour would have done and the way in which we was elected by the Unions. But its more; there's something about him. He simply isn't Prime Minister material. And to that end I say "carry on, Ed".

No surprise, you might say, because I am a Conservative and I am sure that the Labour Leader doesn't want my kind thoughts or warm words. True enough. But tonight I began to wonder if this is how people saw William Hague, or even IDS and Howard. I liked Mr Hague enormously; but door after door in the 2001 campaign people expressed concern about him, asking if he was Prime Ministerial material. I couldn't see what the voters saw.

Tonight (yes, in the dark) I was out delivering leaflets in a pretty solid Labour voting area of the City and met a man, sat on his steps having a cigarette - impressively without a coat on. When I introduced myself and gave him the leaflet we chatted for a few minutes. He said to me "I can't see Ed Miliband ever being Prime Minister." Those exact words. And suddenly this blog post was born.

The last few days have seen Labour supporters waving and cheering getting very excited about Ed; his poll rating have edged up too. But maybe they don't see what the electorate does, in the same way I couldn't see it about William Hague.

And to round it off, the Oldham by-election made me think of the Uxbridge by-election. Both contests happened shortly after the general election, in seats where the former governing party had a three figures majority turned into a 3,000+ majority. The Tories went from 724 to 3766 in Uxbridge whilst Labour went from 103 to 3558 in Oldham East. The Tories hailed this result as their comback; so did Labour. The Tories went on to another election drubbing next time ... I'll let you fill in the rest.
Posted by Antony at 8:46 PM No comments:

From politicalbetting.com a few days ago; how true .. 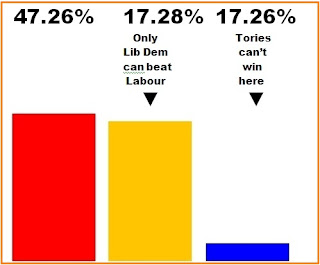 Posted by Antony at 8:35 PM No comments:

Get The Basics Right

The absolute howler made this morning by Shadow Chancellor Alan Johnson, who failed to be able to name the rate of employers NI contributions, for me is an absolute clanger and will end up ranking alongside Clegg's misfire over the value of the state pension for political error making.

You can watch the clip here (4 minutes in!)

When politicians take up their jobs, be it as a Minister, Shadow Minister or even just an MP there are always basics you need covering. I think it was Tony Blair who was always kept up to date with the story lines on Eastenders and Corrie should anybody ask. A very senior Conservative once told me he was always briefed on the price of milk or a gallon of petrol (and the like) before doing a political interview; being caught out on stuff like that makes you loo out-of-touch. Today made Johnson look economically illiterate.

I had my own "version" of this at the General Election. One resident asked me to direct him from his house to Strangers Hall by foot as my test of local knowledge. He wouldn't vote for anybody who couldn't do it. I got it right, including the short cuts because you were walking rather than driving. I still wonder if the others did and who he voted for? Radio Norwich did a similar quiz about the constituency, including naming the destinations of various bus routes, where various shops are and local events; I got them all correct and then fell down on naming the singers in Girls Aloud ...
Posted by Antony at 4:14 PM 2 comments:

And the next Mayor of London is ...

... not Jenny Jones of the Green Party.

Gawd bless those Greens; I do like them - personally that is. Many of the Greens I know are fine people. However today's announcement by their London Mayoral hopeful Jenny Jones does make you wonder for their collective political sanity.

Ms Jones wants to raise the congestion charge to £50 per day and extend it out to the M25.

Now, we know that Ms Jones has form; when I was at UEA I was amazed when I heard her in a public meeting say that the solution to traffic was to rip up the roads and go back to dirt tracks. But this does hit a new level of idiocy. A lot of people in Norwich who commute to London will be very worried by this policy.

It will cripple anybody who wants to live in the Home Counties and work in London, stifle business, be almost impossible to collect and hit the poorest the hardest. I assume people within the M25 would be allowed to drive for free (because if not it would cost them £50 to get off their drives or out of their roads) and so house prices just within the zone would soar. It actually beggars belief that any candidate for high office, who claim to be a grown up serious political party would suggest this. The likes of Adrian Ramsay and Claire Stephenson must have their heads in their hands tonight, weeping ...

The Sun YouGov poll tonight has the LibDems down to a new low of just 7 percent - seven percent.

If this goes on and the party holds together then they have much, much bigger balls than I ever gave them credit for.
Posted by Antony at 10:32 PM No comments:

After the shock of losing Pete Postlethwaite, another star in his 60s passes away - Gerry Rafferty. This has to be his greatest hit and, in my humble opinion, one of the best songs of all time so a fitting tribute would be a mere 4 minutes spent on "Baker Street".

UPDATE: BBC Reports that author Dick-King Smith has passed away too.

Posted by Antony at 9:27 PM No comments:

Best Post Ever (and possibly the best idea for a new voting system too!)

Amazingly good from the ever brilliant politicalbetting.com:

Here’s a suggestion for a fairer voting system. Everyone gets 6 votes. They can either split them 3-2-1 for their favoured parties, 2-2-2 if they’re not too bothered, 4-2-0 or even 6-0-0 if they feel really strongly. People who can’t add up to 6 are disenfranchised and the outcome reflects the strength of people’s feelings as well as its direction. It would be a bit like ’spending’ the green plastic charity tokens that you get in Waitrose. I would have voted 5-1 Tory-LibDem. (”Toss the bums a dime” as the great man sang.)

Always keen to showcase talent rather in excess of my own take a look at this blog produced by Josh Hannan; a Year 11 pupil from my school and certainly a young man with a bright future (and maybe in politics if he wants it).

I'd certainly say Josh is more representative of the views of young people than certain morons throwing fire extinguishers from rooftops. It's well worth a read.
Posted by Antony at 9:07 PM No comments:

Why are there so many Tesco's in Norwich?

... the answer is simple; because people shop in them.

More from the EN here.
Posted by Antony at 9:11 PM No comments:

Well, that headline is about as ridiculous as this story in the Mail on Sunday which seems to suggest that MPs shouldn't hold parties or go on holiday (let alone - wait for it - at New Year). I think the political team at the MoS may be having a "d'oh" moment when they look back at this. Not only are the claims rather loose (for example the Speaker's Party cost just £22 per head) but are we really saying that Ministers, MPs or other public figures shouldn't have fun and do things that the rest of us are doing or at least want to do? I know not everyone can afford to go skiing or stay in a Villa; but I suppose people wealthier than I am do things that cost more than I can do.

And for the record, the headline refers to my parents place in Uxbridge and a small family get-together at which we sub-divided a marked-down Tesco scotch egg into eight. Sadly, the whole of that sentence is factual.
Posted by Antony at 8:37 PM No comments:

Happy New Year to all. We are having a lovely time and have had lots of chances to catch up with family and friends, many of whom we have not seen for a long time. I hope you all have a wonderful day and the resolutions are coming along.

p.s. Boris - whoever did those fireworks in London deserves a payrise and possibly an OBE.

p.p.s. No Sir Brucie??? Makes you wonder what the qualifications are these days ...
Posted by Antony at 4:31 PM 1 comment: