Clarke to stand - and lose - in Norwich South 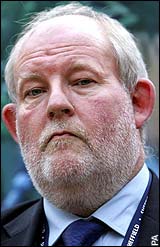 Here is tonight's press release:
Responding to tonight's news that former Home Secretary Charles Clarke will seek re-election to his Norwich South constituency, Tory Leader at City Hall Antony Little said:
"It is right that Charles Clarke puts himself before the electorate so that local people can judge him on his record as both a government minister and a constituency MP."
"With Labour on the ropes nationally and David Cameron's Conservatives ahead in all the opinion polls, Norwich South will be a key seat at the next election."
Councillor Little, who stood against Mr Clarke in 2005, added: "With the LibDems losing council seats across Norwich and the Conservatives winning again, it is clear that only the Conservatives can beat Labour here in Norwich South."
"If people want to pass judgement on Mr Clarke's lamentable record as our local MP, or on Mr Blair's wasted 10 years in power when taxes have risen but services continue to suffer, they should do so at the ballot box by supporting the Conservatives and David Cameron's message of change, optimism and hope."
"The next election is already looking very interesting."
Posted by Antony at 10:05 PM

Clarke is halfway down a steep bumpy slope to political annihilation.

The obvious dent in his progress is his failure with the home office, especially in comparison to the tough-guy Reid approach. I think his refusal to take the government position offered afterwards didn’t go down too well locally either. Some people probably do still see him as the amicable rebel, but I think that’s largely worn off now.

I’d like to think people also haven’t forgotten it was him who oversaw the introduction of tuition fees. Identity cards too, anyone?

The EDP still give his views a fair bit of space, surprisingly, which is quite unfortunate for him in truth, as rarely does he have an opinion that isn’t general disagreement and disdain, without of course, suggesting an alternative to whatever the situation is.

I shall not go into things on a national scale, which is a very different affair, but a decent candidate, even a Tory (one-nation only of course), deserves to win there.

I can still remember when he came to my school a few years back. Although nothing spectacular, back then he seemed to have more dynamicity about him. Now it seems he’s slowly descending to a vegetating political observer. In September this year, he took up a consultancy post with a leading London law firm, leading to speculation he anticipated not returning to frontline politics, and perhaps, not returning to it at all.

I don’t know much about the Lib Dem’s candidate, that guy with the long surname, but as you say, they’re stagnating on the national scale. If you can actually get a swing in favour of the Tories this time, you might well be in with a chance.

Antony will you be applying for a second bash?

I think Charles Clarke is losing the plot seriously. He must be really fearing someone like Adrian the Bean Stalk or Rupert the Bear standing against him at the next election. I wouldn't claim to be a Green Party supporter, but I think Labour would be better off nominating someone like Steve Morphew. Clarkes had his day and is not the back back benches. New blood required. Clarke is destructioncurrently in intellectual meltdown and political self

Antony please stand and put us all out of our current Clarke misery.