LibDems heading for government: The evidence 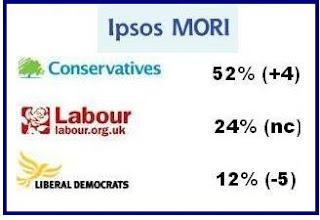 With thanks to politicalbetting.com for the graphic.

This is an absolutely amazing poll, in fact astounding.

I can't believe a quarter of people would still vote Labour, for a start.

The depth of the Tory support is now clearly evident. But Cameron won't celebrate - the deals not done until the votes are in.

But tonight the man who should be worried is Nick Clegg - he's taken them back down to the depths of the Campbell leadership. Today Mr Clegg said he knew where the LibDems were heading - government. If this poll is anywhere near correct the only place he's heading is down.

I hav constantly said that politicans must stop saying that which everyone knows to be false, because it damages politics as a whole. Government ministers aren't wandering around saying the economy is fine, because we know it isn't. They say they "understand" and "appreciate" the tough market conditions. Clegg's boasts - like other boasts he makes - are totally unbelievable. This week he has shown himself to be in control of his docile party but totally out of touch with the British people (value of pension and his Sainsbury comments are classics). I suppose he jst ought to be happy with 12% of the vote.