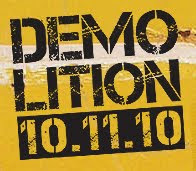 no wonder it attracted the thugish element we saw yesterday. You have to take responsibility for your deeds, yes, but so too for your words. I doubt Mr Porter has the honour to accept his part in this. He is putting his short-lived political career above the student fees movement because it would have far more credibility with the public if he put his hands up and apologized. And if Mr Porter will not do this, then his Executive Committee should force him too. And if they won't then the onus is back on ordinary members up and down the country to have their say ...
Posted by Antony at 7:26 PM